The main achievement this week has been fitting the new hood. The vinyl of the original hood was still in good condition but the windows were torn so a new hood was ordered from donhood.com.  It was with trepidation that I started fitting it but marking the centre line on the car at the rear and on the hood gave me confidence that it would at least be central.  I used the fitting instructions downloaded from the MGOC because they were more concise .

The header rail was pop riveted in place as per the original mainly because the holes were a bit too large for screws. Hopefully I’ll have no need to remove the hood from the rail. 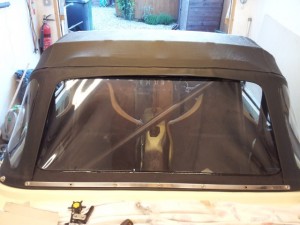 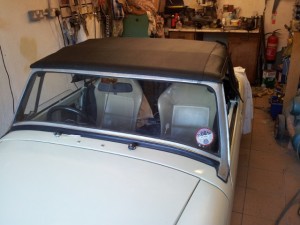 The hood came with 6 Tenax fasteners but I’ll use 2 more to replace the velcro strips used on some Midgets and these are still to be fitted.

Since the above photo was taken the passenger door handle and lock are installed and the inner window strip was also fitted.

It is now the 22nd and I’ve just realised that I didn’t publish this post so here is a bit more… The to-do list is getting shorter following a few evenings working on the doors. The door mirrors were fitted using the Midget specific mounts for the Tex mirrors.  I did remember to wind the window up before drilling through the door… 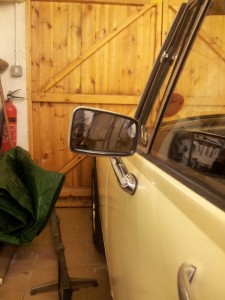 To save time the existing navy blue door cards were re-used and I’ll sort something out when I’m on the road. It could be new door cards in black or I could try spraying the navy ones, we’ll see. I’m sure the MOT man won’t care too much that the cards don’t match the rest of the interior. 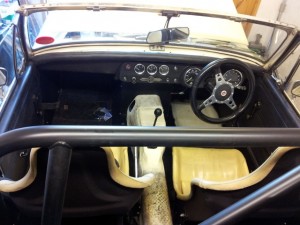 Next up will be finishing the tunnel area. I’m hoping to be MOT ready in two weeks.