Things have been quiet on the Midget front due primarily to the other project at the coast but there have been a couple of tweaks lately.

The cams have been swapped over so the 264 is now on the inlet and the 256 is on the exhaust. The butt dyno felt that it was better that way but the interweb suggested otherwise. Also recently acquired were a pair of HKS vernier cam pulleys which looked great until I came to fit them. I can only assume that they were not for the 16V engine because the locating pin hole was larger and they didn’t align with the pulley alignment mark on the backing plate.

Ten minutes on the pillar drill and the pulleys had new location holes drilled in the correct location. Not sure I like purple but they’ll be out of sight for most of the time. 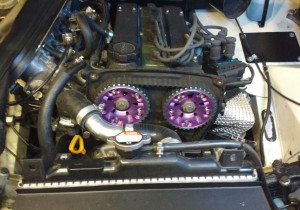 The other minor tweak has been the fitting of a shift light on the dash. As I’m running a Megasquirt ECU it needed an output transistor stage added and fortunately I had the foresight to add the wiring in the loom for the 3 additional output wires when creating the loom. Once wired up I was able to set it to trigger at 3000rpm to prove operation and now it is set it to activate at 7000rpm. That should allow me enough time to shift up before the 7300rpm rev limit.