Since it has been on the road the air filter on the 4AGE throttle bodies has been a foam ITG unit that slips over the trumpets. You hear that sock style air filters rob power and I don’t see why the filter I was running would be any different. Also the noise generated was rather excessive so something needed to be done. Some time ago I purchased a Pipercross PX600 airbox but hadn’t gotten round to fitting it.

Clearance under the bonnet is tight ( the existing foam filter touches the bonnet) so it required some juggling to fit. By aligning the airbox so that it was high at the rear and low at the front it fitted under the bonnet. However it did just touch the bonnet but this was overcome by the use of a heat gun and some reshaping of the airbox on the top edge. 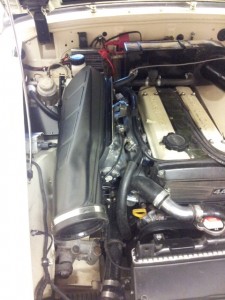 The good news is that it all works and induction noise is much reduced so turning it more into a Q car.

This weekend I’ve finally fitted an anti-tramp bar kit that I purchased a while back from a trader at the MG event at Silverstone.  Thinking I would need longer U bolts I made enquiries to the trader but (fortunately) they didn’t reply so I started looking at making the brackets that attach to the springs. This was when I discovered that the kit I had been sold wouldn’t work because the rear brackets weren’t for a Midget.  At least I found this out before buying longer U bolts.  A few hours of cutting, drilling and welding had some rear brackets made up and the anti-tramp bars fitted.  Next up will be the panhard rod. 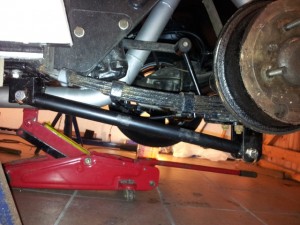