After fitting the suspension the brakes were the next job. Last time I made some brake lines i was with copper pipe but this time I decided to use cunifer pipe. This was when I found out how bad the basic Laser brake flaring tool was. Fortunately I managed to lose the forming “top hat” so had to rummage through the tool box and found the old Motaproducts tool donated by my father-in-law a few years ago. It turned out to be a cracking tool and made lovely flares.  I later discovered that the line down the transmission tunnel needs to be a bit higher at the front so that the gearbox doesn’t touch it when being fitted. 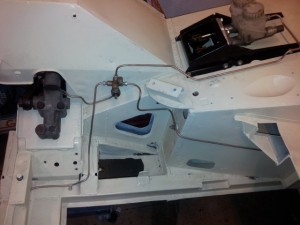 Once the brake lines were fitted the engine and gearbox could go back in. Once installed the next task on the virtual list was to fabricate a bracket for the alternator. It was made from 5mm plate and shared the 2 front mounting holes with the engine mount. Alignment was done with the Mk 1 Eyeball but after assembly it looks like that this needs recalibrating. That plus a bit of play in the alternator mounting hole resulted in 4.5mm misalignment. The alternator mounting hole was drilled out to 12mm and lined with some 12mm OD alloy 1mm thick tube that was a nice fit to the 10mm bolt.  A bit of a tweak on the bracket mounting  holes resulted in a near perfect alignment.  The tension arm came from the pot of odds that one accumulates and will be shortened at some point. 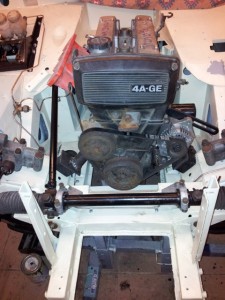 The steering rack and column were fitted to check space etc. Next up is the cooling and fuel injection.